Mussoorie one of the most popular hill stations in the state of India country, Mussoorie is often called the Queen of the Hills. Located about 290 km north of New Delhi, it is an alluring paradise for vacationers and honeymooners. The city offers some of the most spectacular views of the Himalayas and has scenic Himalayan peaks west of Garhwal.

From west to east, the imposing peaks of Bandar Poonch, Srikantha, the Gangotri Group and Chaukhamba offer a spellbinding panorama. Check out our online Mussoorie travel packages to find out more about the places to discover, the myriad of adventure activities to take part in and the stunning scenery to behold. Located in the Dehradun district of Uttarakhand, Mussoorie is a hill station at the foothills of the Garhwal Himalayas. Known as the “Queen of the Hills”, it was once the summer capital of ancient British India. Its waterfalls, lakes, nature reserves, hiking trails and colonial architecture draw huge crowds. Experience the best of Hill Station with mnd travels’s range of Mussoorie

For spectacular views of the surrounding Himalayas, head to Gun Hill, Mussoorie’s second highest peak, also accessible via the Gun Hill cable car. Waterfalls like Kempty Falls, Jharipani Falls and Bhatta Falls are a fantastic sight and picnic spot. Cloud’s End is a Mussoorie must-see, located at the top of the hill station and offering magnificent views over the Algar River valley.

Jabarkhet Wildlife Sanctuary and Benog Wildlife Sanctuary are excellent places to view the wildlife of the region, such as leopard, deer, mountain quail, etc. Visit the 19th-century Christ Church, George Everest House and Skinner’s Hut to learn about Mussoorie’s colonial past, or pay homage at Jwala Devi Temple and Shedup Choepelling Temple. Another popular tourist attraction is the Mines of Lambi Dehar or the “Mine of Death”.

Your trip to Mussoorie should include a day to explore museums such as Soham Heritage & Art Center and Mussoorie Heritage Centre. Adventure seekers will definitely love Mussoorie as it is perfect for paragliding, trekking, rafting and rock climbing. Also, Colonial Mall Road offers a great opportunity to buy local produce and taste delicious food. Mussoorie is best for sightseeing between April and July when the weather is ideal. Apart from Mussoorie, there are other tourist destinations such as Dehradun, Jim Corbett and Nainital. The oldest national park in the Himalayas, Jim Corbett National Park is home to the endangered Bengal tiger. It is ideal for forest safaris, bird watching and accommodation in luxurious resorts. Dehradun is the “winter capital of Uttarakhand” and is a must-see due to Rajaji National Park, Malsi Deer Park and Tiger View Jungle, waterfalls like Shikhar and Sahastradhara falls, and other attractions such as Robber’s Cave, Lacchiwala, Tapovan Temple and Chetwode Hall popular tourist destination. On the other hand, Nainital is home to lakes like Naini Lake, colonial buildings like Gurney House and the magnificent Himalayan View Point. Don’t miss Naina Peak, where you can admire the town below and the picturesque village of Jeolikot. Whether you’re traveling with your friends or family, MND travels offers plenty of customizable and affordable Mussoorie packages that will leave you with countless memories. 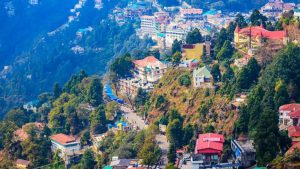